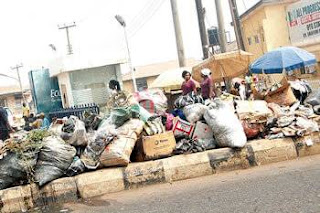 By YinkaAdeniran1
As a way of encouraging positive attitude towards the indiscriminate dumping of refuse across the state, Governor Seyi Makinde of Oyo state had disclosed that the state would soon introduce market cleanliness awards for all the markets across the state.
This is as the state government also said it will soon unveil a new waste management architecture that would redefine how waste are been collected and managed across the state.
The governor spoke on Tuesday during an environmental stakeholders meeting with trade groups, traders, market men and women, artisans, community development associations, community leaders among others.
The meeting which held at the Western House of the Parliament Building, House of Assembly Complex, Agodi Secretariat, Ibadan was attended by the top government functionaries including commissioners, Special Advisers to the Governor among others.
Speaking on behalf of the Government, the commissioner for environment and habitat, Mr Kehinde Ayoola described the move as the carrot part of the government “carrot and stick” approach to tackling indiscriminate dumping of refuse across the state.
He noted that, the government’s efforts at introducing environmental tribunals and mobile courts have been yielding results, saying many culprits have been caught in the act and appropriate sanction melted out to them.
Ayoola said “The purpose of the meeting is part of our task to ensure that our state is totally rid of refuse. We know that in situations like this, you have to adopt a bottom up approach to issues. You cannot just be putting it down to the people, let them also come up with suggestions, which was what happened at the meeting today. A lot of ideas were raised and the government is now in a position to further grasp the situation further.
“And most importantly, the government sort to secure the buying in of the average market man or woman, the community development association, the artisans groups in the task to make Oyo state clean.
“The meeting will be a continuous exercise because we need attitudinal change in our approach to waste and make places where our people do their daily works generate a lot of wastes, that is why we are talking to them.
“The idea of rewarding clean markets across the state is just a way of incentivising. We adopt both carrot and stick approach, because the government has set up environmental tribunals to carry out enforcements and sanction people who infringe on environmental laws and regulations, which is the whip side of it. The carrot side is the idea of rewarding the best and cleanest markets in the state regularly.”
He added that the government will also engage more private sector refuse collectors who will collect refuse at a token fees from private residence, saying those currently on ground are obviously not enough.
“The environmental tribunal have made a number of arrests, the mobile court keeps sitting on three times a week to trial environmental offenders and appropriate sanctions have been melted out to people.
“We are strengthening our enforcement mechanism generally. The governor will very soon unveil a new waste management architecture for the state, which will also include a new mode of enforcement of environment sanitation laws both on Thursdays and Saturdays”, Ayoola added.
Also speaking, the Executive Chairman, Oyo State Waste Management Board, Prince Seun Adelore disclosed that officials of the agency, supported by all government functionaries have been on the road to clear refuse at midnight, as a way of tackling the heeps of refuse that are almost taking over the state.
“Our efforts at clearing the refuse at midnights have been yielding a whole lot of results. The refuse on the median has been reduced drastically because we have been clearing refuse round the clock. We have been on permanent night duty for the duration of the task force duties.
“The enforcement part of the environmental laws will help in the efficiency and effectiveness of waste collection and we are doing everything possible because most of the atrocities are been committed at night and early in the morning.
“We have made appreciable progress, people have been caught, people have been sanctioned, people have been fined and it is sort of reducing.
“We are planning to redelienate all our routes and we are working towards engaging a new PSP. Initially, there were over 400 PSP refuse collectors in Oyo state but reduced to 107 by the last contractor, so we are bringing more people on board to get more people in the net and if we get more people in the net, there is going to be about 80 percent compliance and that is exactly what we need.
“By the time we reduce the waste that is coming from the inland, by the time we engage more PSP refuse collector to take all the refuse, then the refuse coming to the median and roadside will drastically reduce and with time gradually disappear.”, Adelore said.
In their various reactions, some of the stakeholders in attendance declared their support to work with the government to ensure a better and cleaner Oyo state.
The appealed for more consideration and affordable rate to be charged by refuse collectors so that more people will be willing to patronise them in the stead of dropping the refuse indiscriminately on the roads.
Post Views: 13