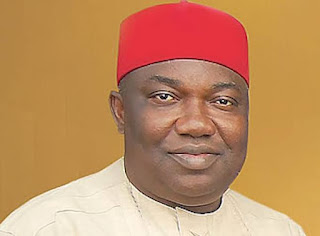 The National Youth Service Corps (NYSC), on Monday, beg to Ifeanyi Ugwuanyi, Enugu State Governor, to increase the allowance of corps members in the state’s institutions.
Stephen Gabriel Dewan, the coordinator of NYSC in Enugu State, made the appeal during the swearing-in ceremony of 2019, Batch ‘C’ Stream 2 corps members at Awgu Orientation Camp.
Corps members serving in state’s institutions within Enugu were paid N1, 000 monthly while their colleagues in the remote areas receive N4, 000 monthly, at the swearing-in ceremony, Dewan who commended the governor for his support also appealed for an increment in the allowance of corps members in state’s institutions.
Dewan also announced that a total of 1,121 corps members were registered for Batch ‘C’ Stream 2, made up of 548 males and 573 females and that they were ready to take oath of allegiance and commence their national assignment.
In his own address, Governor Ugwuanyi, who was represented by his Special Adviser on Special Duties, Uwakwe Ukuta Azikiwe, says the corps members that Enugu State would make them feel welcomed as the people are peaceful, accommodating and friendly people.
Post Views: 15