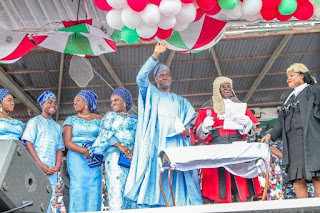 There have been a lot of write – ups and controversies on a very occasion we can classify as the “Biggest Nigerian Event” held in Nigeria in the year 2019, but i will vividly state that the biggest event is the day Engr. Seyi Makinde was sworn in as the 8th democratically elected governor of Oyo state.Probably because i am in my middle 20’s and i am also a field journalist that has been mostly assigned for news beats within Oyo state, I couldn’t qualify any event to be bigger than this swearing in ceremony in Oyo state and Nigeria at large in the year 2019.
Miracles and unbelievable wonders happened this day to the extent of giving Oyo state a hope of new dawn in governance since the 8 years ruling of the All Progressive Congress by the immediate past governor, Sen. Isiaka Abiola
1. Huge Volume Of Crowd.Numbers of Oyo state elites, indigents, downtrodden, party loyalist, international friends storm the ObafemiAwolowo stadium otherwise known as the liberty stadium on the 29th of May, 2019 which is the day Governor Makinde was sworn in.I was very lucky to be part of the accredited Journalists that covered the inaugural ceremony and i can say i have never seen this volume of crowd before in my life.This miracle was tracked to have happened only during the political campaign of the late premier of the defunct western region, the late “Sage” Obafemi Awolowo in the twentieth century.Remember that the western region comprised Oyo state, Ogun state, Ondo state, Ekiti state and Osun state. This is very miraculous and wonderful.
2. A Very Cool Weather Throughout The Event.The month of May happened to fall into the strong dry season, the sun seems to be scorching and body hitting all day. But on this miraculous day, the weather was very cool all through and everything went well.The lovers of this governor who spread around the main – bowl of the football stadium were comfortable with the atmospheric texture of this day.The weather was accompanied by a heavy rain that fall during the night of this day and for 7 consecutive days.Many critic who spoke and write about this miraculous incident described it as a sign of “Omi Tuntun”, the nickname of Governor Seyi Makinde.
3. Immediate Cancellation Of 3,000 Educational Levy.Like i have never heard it before in my life, a governor that started working and implementing policies almost immediately the then chief Judge, Justice Munta announced him as the duly elected governor.Even the messiah Akinwunmi Ambode of Lagos state who started fixing roads the night of his swearing – in was a little bit behind the proactive governor.Makinde ordered the immediate cancellation of 3,000 naira government – educational levy imposed by former governor Abiola Ajimobi. Student therefore paid one thousand naira per term until Makinde assumes office.
4. Immediate Dedication of His Salary for Teachers Pension Fund.Unlike other governors and political office holder who cherish their armed – robbery salary than the electorate that voted them in, Makinde devoted his monthly salary to the scheme of the teachers pension funds in the state.Also while presenting the 2020 budget before the hallowed chamber of the Oyo state house of assembly in November, he announced that 40 percent of funds allocated to the office of the governor and the house of assembly have been reduced to create more space for other capital project. this is miraculous.
5. Visitors From Different State Amidst Party Differences.Oyo state on the swearing – in day hosted hundreds of political personalities in Ibadan as they agog to see the new dawn in Oyo state.Personalties like former Secretary general to Military Ibrahim Babangida, Olu Falae, former governor of Oyo state, Prince Olagunsoye Oyinlola, former governor of Ekiti state, Ayodele Fayose, all members of the Afenifere social group, and other top notch graced the event.Despite the fact that they were not on a good term during the political struggle, Oyo state former governor, Otunba Christopher Alao Akala was present to witness the miraculous event.In the short run, Governor Seyi Makinde has gained the heart of the Oyo state populace since Day – 1 of his government. He can be termed as the peoples governor.Though he made a lot of campaign promises, but he has surprisingly been leveraging on his cardinal goal since he assumed office.Makinde himself is a miracle to Oyo state.

Do you believe this event to be the biggest event in Nigeria for 2020?
What is your view on this?
Kindly do well by liking, sharing, and commenting on this write – up.
You can as well follow us to see more of our updates.
Post Views: 14