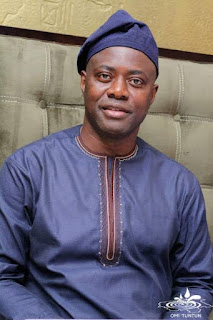 Aremo Adeleke, who stated this while speaking to newsmen in Ibadan ahead of the State’s one-day Tax stakeholders’ summit holding in Ibadan, added that the administration has been vigorously pursuing improved IGR since its inception.
According to him, improved IGR would make the vision to move Oyo State from poverty to prosperity a reality.
He added that the State under the leadership of Governor Makinde has set the objective to be self-sufficient financially and to have enough resources to cover all its recurrent expenditures such as salaries and wages.
Adeleke stated that when this objective is achieved, it would become easier for the State to attain the prosperous height it so desired.He further stated that it was for this purpose that the OYIRS and the Ministry of Finance are jointly floating a programme tagged: “Tax Stakeholders’ POVERTY TO PROSPERITY Summit.”
Aremo Adeleke also counselled that for the benefits derivable from improved IGR to be sustained, the citizenry would have to play their parts by ensuring regular payment of their taxes, levies and rates, as “there is no government that can do much without adequate internal resources.”
He stated: “ It is to further reassure ourselves that the OYIRS  and the Ministry of Finance is floating a one-day conference on January 28.
“The Summit essentially is for sensitization of all stakeholders and for the Governor to be able to enumerate all his efforts at restructuring the Internally Generated Revenue architecture.
“The Governor will also solicit the co-operation of the taxpaying public from manufacturers to business men as well as other operators in the Informal Sector – artisans, drivers, market women and men, motorcyclists, trade unions and trade associations etc. He will stress the need for all to contribute their quotas and discharge their civic duties.
“His Excellency intends to establish the nexus between improved and adequate IGR and the ability of his administration to provide sustained good governance. At the earliest possible time, the State objective is to ensure it has enough IGR to cover all its recurrent expenditures such as salaries and wages, cost of running the government and maintaining infrastructure.”

Source: Vanguard
Some of the dignitaries expected at the summit include Prof Abiola Sanni, a Professor of Taxation and Fiscal Matters, Mr Samuel Kolawole, MD of University Press and current Chairman of Manufacturers’ Association of Nigeria, Oyo, Ogun, Ondo and Ekiti state; prominent business man, Chief Olatunji Fadairo, CEO of Tafotech Group, and The Asiwaju of Eruwa Land, and Mr Lawal Abubakar, Executive Secretary, Joint Tax Board,
“We expect Messages of Good will from His Imperial Majesty, Oba Saliu Adetunji, Aje Ogungunnuso 1, the Olubadan of Ibadan Land,” the  statement read.The OYIRS boss added: “We expect all tax payers and the general public to turn up en masse for this important dialogue, as it will represent a turning point in government-public engagement.
“This Summit is part of Governor Seyi Makinde’s strategy of pushing the frontier of good governance. Taking our people from poverty to prosperity through responsible citizenship is not just a slogan of this government it is an ideal for which we are totally committed to and for which our people must totally imbibe.”
Post Views: 13