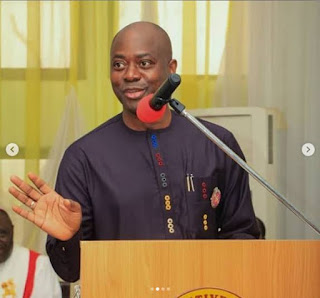 The Governor of Oyo, Engr. Seyi Makinde, has been asked to rise to his responsibility as the Chief Security Officer of his state and ensure the current spate of killings in Oyo is brought to an end

The Grand Council of Yoruba Youths, in a press release signed by its President General, Comrade Awa Bamiji, on Wednesday lamented that the “peace and tranquility that were being enjoyed by the good people of Oyo State had, once again, become history in the Pacesetter State which has the City of Ibadan, as the Capital.
“Coincidentally, Ibadan, was the Capital of old Western Region and by virtue of this, the political activities in the region have Ibadan as their epicenter.”
The group lauded the recent launch of Operation Amotekun by the governor and his colleagues in the Southwest to address the worrisome state of insecurity in the region and maintained that the effort raised hope of security ” against herdsmen and farmers crises, kidnapping, banditry, ritual killings, and robbery.”
However, according to the group, the present situation in the state indicate that serial killers and assassins are in full swing and, therefore, needs full attention of the state’s security architecture.
It recounted: “The first victim to be removed from circulation was the Leader of APC, in Ona-Ara Local Government
who was brutally assassinated around 3pm, just after observing his 2pm Islamic prayer, on Wednesday, 22nd January, 2020.
“The heartless manner in which the 77 years old amiable politician, Alhaji Arasi Babatunde Oreitan, was slaughtered in his house, was not only condemnable but highly shocking.
“Oyo State Commissioner of Police, Mr Shina Olukolu, and his Police Squad, from the Police Headquaters, Eleyele, confirmed that it was bad enough to witness the gory scene of the incident.
“Alh Fatai Yussuf, popularly known as Oko-Oloyun, a popular Lagos – based trado – medical Expert, was murdered on Thursday, 23 January, 2020, around 4:30pm on the road while traveling to Iseyin, Oyo State.
“He was reportedly attacked by hoodlums at Igbo-Ora and his corpse was later deposited at the mortuary of Igbo – Ora General Hospital.
“The latest one was Mr Isa Azeez, Alajase, 50 years of age, whose assassination was recorded during the resumption of the appointed Local Government and LCDA Caretaker Committee members on Monday, 3rd February, 2020, in Ogbomoso. Mr Dotun Somefun was seriously injured along with 7 others.”
The release, therefore, urged “the good people of Oyo State and the administration of Governor Seyi Makinde to take note of this unpalatable record, which had been a thing of the past during the 8 years of administration of former Governor Abiola Ajimobi”.
“We had painfully lost 3 innocent souls just within two weeks in Oyo State. We are appealing to the good people of Oyo State, all the governors and leaders of thought across the Southwest States, to advise Governor Seyi Makinde, to quickly wake up to his constitutional responsibility of protecting lives and properties of all residents of Oyo State.
“We call on the security agencies in the State to be proactive by ensuring that all these agents of violence are apprehended and brought to book.”
“With this release, Governor Seyi Makinde is being advised to quickly wake up, because the people in the State have started living in fear of their lives again.
“It is our belief that nobody’s interest or political ambition deserves the blood letting already experienced.
“Finally, we deeply sympathise with the families and friends of those who lost their lives to the avoidable blood letting as well as wish the injured quick healing and recovery.” The group concluded.
Post Views: 15