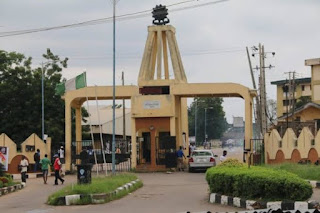 AbulGaneey Mubarak Olayiwola the  Overall best HND graduate of The Polytechnic Ibadan, 2017/2018 set, has been given an automatic employment at the 34th convocation ceremony of the institution.
Mubarak Olayiwola, who studied Chemistry in the Faculty of Science and graduated with a CGPA of 4.70, apart from emerging the overall best graduating student, won additional five endowment prizes for also being outstanding in other science courses in his faculty.
The Chief Executive Officer  (CEO), Chemstar Group of Companies, a private company in Lagos, Apostle Emmanuel Awode, who announced the automatic employment was a fellow and distinguish alumni of the institution.
Mubarak  surprise at the kind gesture of Owode endowment prize which came in form of a job employment, saying, “Really, I wasn’t expecting this. Everything came as a surprise to me. My sincere appreciation goes to God Almighty for crowing my efforts with success and to the donor for rewarding my hard work.”
In his address at the convocation ceremony, the governor of Oyo State, Mr Seyi Makinde, who is also a visitor to the institution, disclosed that the budget recently presented to the state House of Assembly had given education the highest allocation of 22 per cent, adding “hence, we hope that all things being equal, Oyo State will bounce back as the leading educational state and fountain of knowledge, setting the pace for others.”
The governor, who was represented at the event by the Oyo State Commissioner for Education, Professor Dahud Kehinde Sangodoyin, also hinted that a sum of N100 million was approved in the 2020 budget for the execution of capital projects at the polytechnic, just as another sum of N200 million had being approved and released to the institution with the hope that the money would be spent judiciously on the accreditation of the listed courses secured.
Post Views: 12