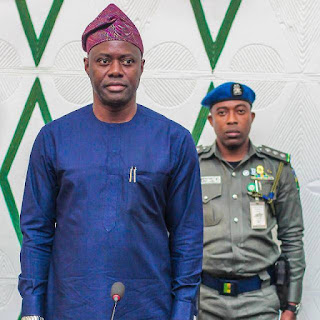 I then zeroed in on Governor Seyi Makinde of Oyo State. He is fresh. He is young. He is different. His style of governance gives rays of hope. He also has substance. He has a heart. Many men and women of power in today’s Nigeria are heartless. Makinde has passion for the job.
Many political leaders only have passion for their pocket. Makinde is one leader the people will freely follow – not because of any inducements but because his populist and people-oriented policies resonate with the people.
He is trying to toe the line of a top-performer governor like Lateef Jakande, who rode in his personal car and lived in his own house throughout his tenure as Lagos governor.
I will follow Makinde closely.
I am minded to hold his feet to the fire. If you have recently travelled around the country, you will easily puncture the lie that the South-West is ahead of the others. Jimmy Cliff described this as propaganda spreading like wild (Australian) fires in the harmattan! Lies! Fairy-tales! Tales by the moonlight! Since 1999 at least, we have fallen on hard times in the South-West. The leadership we have had has been corrupt and inept.
We now lag behind other regions in infrastructure and in economic development! We live only on past glory!
I understand Makinde has made mistakes. Don’t bite more than you can chew. Don’t put too many irons in the fire.
That was the fatal error Aregbesola committed in Osun. And don’t be Mr. Know-It-All. Don’t run too far ahead of the people. Don’t be too much in a hurry.
The people must always see your rear light. And always remember Jethro’s advice to Moses: You cannot do it all alone. No one is the sole repository of knowledge, wisdom and understanding.
Finally, be mindful of your template. Once the people around you discover your weak point or blind spot (like Pastor E. A. Adeboye described it recently), many will exploit it to their own selfish advantage.
On this note of Makinde being a harbinger of hope in our wilderness of hopelessness and pathfinder in the aridity of derelict governance and mindless exploitation of the people, I declare Mr. Seyi Makinde my “Man of the Year 2019.”
Post Views: 12