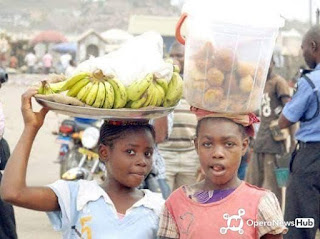 Oxford Advanced Learner’s Dictionary defines hawking as moving to sell things by going from place to place, asking people to buy them. No doubt, street hawking is on the increase in many cities, towns and villages in Nigeria. This social evil is a backdrop to educational growth of any nation.
Education is pivotal to national development, hence the need for citizens to attain some level of basic education. Unfortunately, many families in Nigeria, especially those in the low socio-economic class, cannot afford decent formal education due to financial challenges, leading them to engage their children and wards in various activities, including hawking.
Studies show that the age range of female street hawkers is between 7 and 24, while that of male ranges from 10 to 45. There are several causes of street hawking among children which include- economic crackdown, decayed value system and public acceptance.
Economic crackdown remains the most common reason for street hawking among children from poor families. The search for money in a depressed economy is obviously one of the major reasons for parents and guardians to send their children or wards to hawk. Most of the street hawkers are either in primary or secondary school and the ability of their parents to train them in school is dependent on the proceeds from their daily sales.
At the expiration of each day’s sales, the children become weak and tired that they are unable to concentrate and study on their own. Apparently, parents and guardians do not realize that the means by which the mental, moral, social and material inheritance of the society can be passed from generation to generation is through formal education.
Moreover, decayed value system fuels street hawking among children. Majority of Nigerian parents believe that children are sent by God to serve as helpers, both for economic and social purposes. That is why many Nigerians want to have as many children as possible, whether they have the means to train them or not. In this case, street hawking becomes the next option.
Furthermore, public acceptance of street hawking by children in some areas encourages the practice. Most state governments have banned street hawking because of its negative consequences but most members of the public do not see anything wrong with it. When traditional, religious and town leaders do not seem to condemn street hawking within a community, there seems to be a justification of the trade.
Street hawking has enormous devastating effects on the child, the parents and the larger society. One of these is that it will have adverse effect on the hawker’s studies and academic performance. It is an understatement to say that street hawking creates a deep wound on the performance of student hawkers. It serves a bitter purpose in the life of the students.
Many female Street hawkers are often victims of rape, while their male counterparts fall prey to gangster and cultists. It hurts one’s self esteem, it erodes the trust one ever had in one’s earning a living. It leads to resentment and a loss of intimacy and vulnerability. Many of the hawkers have been killed in accidents, while others have fallen victims of rituals.
Governments, who have not enacted a law abolishing street hawking, should do so immediately. Those who have enacted should constitute committees to enforce it to ensure that offenders are penalized. There should be massive sensitization of the public on the dangers of street hawking.
Government should raise the living standards of the poor through targeted economic programs. If all these measures are taken, we will be able to reduce the effects of street hawking among children in the full realization of building an egalitarian and better future for all.
Post Views: 17