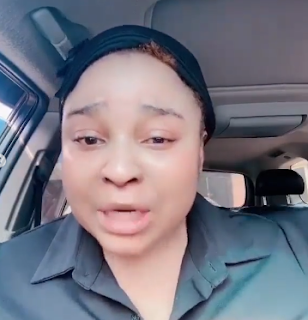 Popular Yoruba actress has taken to social media to share how her mother was physically assaulted by a landlord in her area.
Sharing photos of the injuries on her mother’s face, she revealed that the mum was beaten up and a bottle broken on her head, because of security fee.
Although she didn’t go into details about what really happen, she stated that the mother who is also a landlord and has been living in the neighbourhood for 20 years was attacked by the man who is also a landlord.
Her post reads: “Landlord to landlord! She said she came out to explain to him and before she said anything the man said she is not going anywhere ! they should lock the gate and she said she wants to drop her grandchild in school and the man started! we are at the police station now but this won’t go! the man can’t go like that!”
Bimbo went on to make a video from outside the police station and she can be heard saying the police have done nothing about the issue despite the glaring proof which is her mother’s injuries.
Post Views: 14