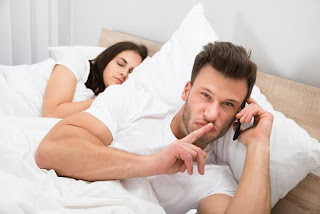 Marital drama is never-ending. From the over jealous man to the protective woman, there’s always a reason to argue. In this post, we are going to share with you how Husbands react when their wife posts her pictures online According to Ada Bekee.This is another wonderful thread by Ada Bekee a facebook influencer and blogger about marital related matters. Here are the 5 ways husbands react when their wife posts her pictures on Facebook;#1. The Ones Who Don’t CareThese men would see your post and go through all your pictures. But they would still act like they didn’t see it. To them, silence is golden.#2. The Ones Who Would Jump and PassThese husbands will do everything to avoid seeing your post. Whenever your post pops up on their timeline, they will keep scrolling. Your page is your business, nothing concerns them.#3. The Ones Who Monitor The Comment Section Like KilodeThe only reason these men come to your page is to go through your comment section. They want to know if any man calls you (their wife) names like “darling”, “baby”, or “sugar”… You better be ready to explain to him why a random guy calling you darling.#4. The Ones Who Critically Analyze ReactionsI usually call these husbands the jobless fellow. They will critically analyze every reaction on your post to make a mental note of the people who used ‘love’ reaction. Be ready for investigation and queries.#5. The One Who Would Take Screenshots of Your Post and Send To Your Parents And PastorsThese ones never approve of posting your pictures online. Once they see any of your pictures, they take screenshots of them and send to your parents and pastors. They’ll be like, “Can you see the type of pictures Tega posted on Facebook? Is that the kind of posing a responsible married woman should be posing?”#6. The Ones Who Would Drop Genuine ComplimentsThese ones don’t really have an issue with you posting your pictures. They would always drop genuine compliments or banter. Every time you post a picture and compliments come pouring in, it only makes them proud husbands.#7. The Ones Who Would Mark Their Territory In The Comment SectionThese ones would always mark their territory in the comment section. They always act under the guise of paying compliments. They’ll be like, “That’s my beautiful wife, the mother of my 13 children and the queen of my kingdom… No man shall put asunder on what God has joined together.#8. The Ones Who Would Reply Any Inappropriate Comment From The Opposite SexThese ones are there to react immediately to any negative comment. If a guy comments, “all I see is beautiful skin and fresh laps,” the husband would sharply respond, “May I know you? Are you aware that she’s my wife?”#9. The Ones Who Never Trust Their WifeThese ones have been suspecting you for God knows when. And they have been waiting for proof. So, they’ll immediately turn into undercover detectives to find out if the suspected ‘boyfriend or boyfriends’ would comment.#10. The Ones Who Never Takes Any ChancesThese ones never take chances. They would go as far as sending inbox messages to warn or threaten any commenter who is overly flirtatious with you.#11. The Ones Who Would Scrutinize The Caption For MistakesThese ones have full attention to details. They would scrutinize caption and correct you privately. They may even suggest you use a better picture that would look more appealing. By the way, these ones are very rare/#12. The Ones That Would Start Fighting When You Come HomeThese ones are very jealous. Once you post your pictures on facebook, be ready for a fight at home. They’ll be like, ” So it has now reached where small small facebook boys would be calling you Sugar and Honey and you’ll be replying abi?”